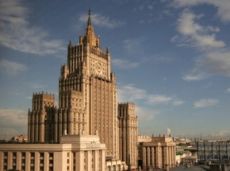 Russian Foreign Ministry welcomed Tuesday the releasing of the nuns of St. Thecla Convent in Maaloula, Damascus Countryside, hailing the Syrian leadership’s efforts in this regard.

The 13 released nuns and three maids of St. Thecla monastery, who had been held hostage by armed terrorist groups who kidnapped them on December 2nd after breaking into the convent and the orphanage affiliated to it, arrived Monday at dawn in Damascus amid popular and religious reception.

“Moscow welcomes the setting free of the nuns for whose release Russia worked persistently on various levels, and we laud the humanitarian decision which the Syrian leadership took in this regard,” the Ministry said in a statement on Tuesday.

The Ministry called upon all parties with influence on the course of events in Syria to intensify work towards a solution that includes all sides of the crisis in the country, including releasing all people abducted by the gunmen in Syria.

Russian Diplomat: Political solution to crisis in Syria is a must

In another context, the Russian Ambassador to Lebanon Alexander Zasypkin stressed that the Syrian Army has achieved great advance, thus, talks on waging a war from south Syria is a mere intimidation, stressing that the balance of power in Syria cannot be overthrown anymore.

"A military solution or resorting to force for changing the regime in Syria have proven invalidity…thus, a political solution to crisis in Syria is a must," Zasypkin said in an interview with Lebanese al-Akhbar Newspaper.

He considered that Russia has been able to prevent the utilization of the Security Council against Syria, adding that those who want to stop war should halt supporting the armed groups and work on making Geneva Conference a success.

The Russian diplomat clarified that the upcoming round of negotiations for Russia should carry something new, the most important of which is "expanding the participation basis of the internal opposition after the coalition had proved that it has no authority over 'the gunmen', as it also does really not represent the Syrians.

Commenting on the Saudi decision on designating the armed groups as terrorist groupings, Zasypkin said that "It has been proven that the so-called 'the Islamic State of Iraq and al-Sham' and 'Jabhat al-Nusra' are terrorist groups, but there are other groups that were not included in the decision such as 'the Islamic Front' and others."

"We are more convinced more than ever that this conspiracy is a series of episodes that has started with Yugoslavia and then moved to Iraq, Libya, Syria and now Ukraine…and this conspiracy should be confronted," the Russian Ambassador said, wondering "what have the Yugoslav people gained by now?…They used to have a strong state, but now they are living in a poor and weak country."