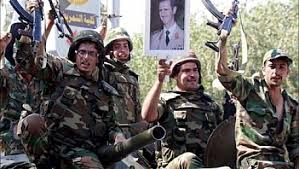 The Syrian Army men managed to advance against ISIL in Hawz Yarmouk in Southwestern Dara'a, discovering a large volume of American arms and ammunition on Sunday.

The army men continued their advances towards the small but key town of al-Shajarah in Hawz Yarmouk that is the most important base of the ISIL in region.

The army men discovered a large volume of landmines, bombs and the US-made TOW anti-tank missiles in al-Shajarah.

Local sources, meantime, reported that the ISIL has been trapped in the towns of al-Shajarah, Ma'aryah, Beit Ara and Abedeen as the army soldiers are advancing from different directions towards the terrorists' bases.

Earlier reports said that the army men, backed up by artillery and missile units, continued to storm ISIL's strongholds in Hawz Yarmouk and captured the villages of Feisoun, al-Awam and Ein Samamah.

The army soldiers further drove ISIL out of the villages of Abu Raqqa, Abu Kharaj and al-Nafe'ah Dam.