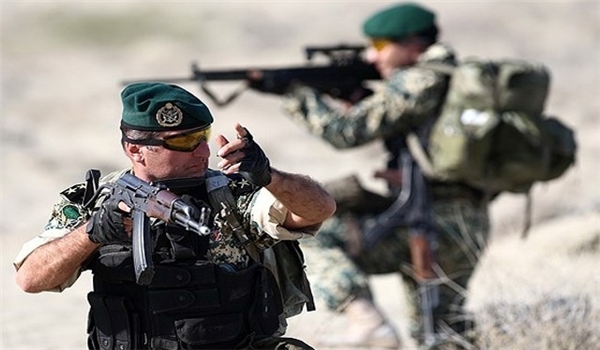 The public relations department of the IRGC Ground Force's 'Najaf Ashraf' base declared in a statement on Saturday that during the clashes with ISIL militants in Western Iran, most members of the terrorist group which consisted of 21 terrorists were arrested.

According to the statement, clashes still continue against the terrorists and the intelligence and security forces have also joined the IRGC Ground Force in the battle.

According to an Iranian intelligence ministry statement, the explosives and bombs were supposed to be detonated in populated areas as part of two terrorist plots, one of them directly designed and led by Saudi Arabia.

The statement added that in one operation, security forces discovered no less than 23 remote controlled bombs that terrorists were going to use in order to wreak havoc in the Eastern parts of the country.

Terrorists had managed to carry the bombs over Iran's Eastern borders and sneak them into the country using help from Saudi intelligence agencies, according to the statement.

The ministry said another shipment of explosives complete with bomb-making equipment were seized from a terrorist group in the Western province of Kurdistan.

The materials, captured from a "separatist" militant group in the border town of Marivan, included military-grade material such as TNT, C4, explosive kits and electronic charges.

The statement did not reveal further details about the identities of the terrorists or their possible targets.

Saudi officials have on several occasions made open calls for instability in Iran.

Hours before a series of terrorist acts that killed and injured several people in Tehran last June, Saudi Foreign Minister Adel al-Jubeir said, “Iran must be punished for its interference in the region.”

The ISIL terrorist group claimed responsibility for the near-simultaneous assaults at Iran’s Parliament and the Mausoleum of the late Founder of the Islamic Republic Imam Khomeini.

A month before that, then-Saudi Deputy Crown Prince and Defense Minister Mohammed bin Salman said in a televised interview with Arabic-language Al-Manar TV, "We will work to have the battle in Iran rather than in Saudi Arabia."