Moscow concerned over coordination among al-Qaeda offshoots in Syria 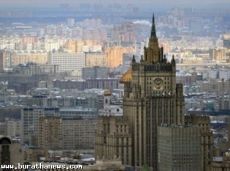 Russia's Foreign Minister, Sergei Lavrov expressed concern over the enhanced coordination among al-Qaeda offshoots in Syria and their acts that aim at ''wrecking peace chances.''

In an interview with the Algerian al-Khabar newspaper published Wednesday, Lavrov said that ''al-Qaeda acts in Syria stoke sectarian and ethnic tensions, and the extremists are committing heinous crimes, including terrorists operations in public places, and cleansing operations such as the massacre in Hatla village in Deir Ezzor countryside, where 60 civilians were killed and their houses blown up, and clergymen were lynched.''

Lavrov renewed Russia's rejection of plans to arm the 'Syrian opposition' that some Western countries are pursuing, considering that '' [These plans] cannot achieve peace and will cause more suffering to the Syrian people and a grave escalation of the regional situation.''

He warned that the arming will put everyone in a lose-lose situation.

He clarified that Russia's stance is not based on any Russian geopolitical goals in Syria, indicating that ''All Moscow wants is that the Syrians themselves decide the future of their country and determine their destiny through democratic means.''

''We are not meddling in the crisis, and not dividing the Syrians to loyalists and opponents, but we unequivocally condemn terrorism, extremism and violence against civilians, especially the sectarian and racist hate crimes.''

He added that Russia opposes ''those who are setting preconditions and pushing the situation towards confrontation, even shedding the blood of the Syrians to topple the regime forcefully.''

Lavrov opposed casting the situation in Syria as a ''showdown between major powers'', affirming that Russia calls for solving the crisis politically through an internal dialogue away from foreign meddling according to international rules as to reach ''a long-lasting solution satisfactory to all spectrums of the Syrian society.''

He added that the international conference in Syria might be an opportunity to restore normalcy to the life in Syria, adding that ''it is the duty of all potential participants in the conference, and we welcome Algeria joining them.''

''We have to show a greater deal of good will and work to offer a genuine support to the Syrians…It is difficult, but not impossible,'' he added.

The Russian Foreign Ministry said that Russia's Foreign Minister Sergey Lavrov and his US counterpart, Johan Kerry affirmed, during their talks in Brunei's capital Bandar Seri Begawan, mutual resolve to convene an international conference on Syria without preconditions and to launch talks between the Syrian government and opposition.

In a statement on Wednesday, the Russian Foreign Ministry pointed out a Russian-US rapprochement on the final goals for settling regional conflicts.

The ministry added that the two ministers discussed bilateral relations, in addition to the regional situation, especially in Syria, the Korean Peninsula and Iran's nuclear program.

Lavrov and Kerry had agreed, during their meeting on May 7th, on holding an international conference for solving the crisis in Syria.