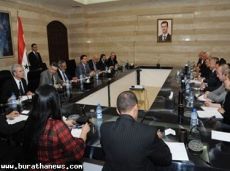 Prime Minister Wael al-Halqi said that the government has taken a number of measures to confront the unfair economic, media sanctions which target the national economy structure and the Syrian state, calling on the Syrian people and government to face this unjust war.

"The government works on all levels to confront the aggression against the Syrians by mercenary terrorists who are backed by some international and regional powers," al-Halqi said during a meeting of the Ministerial political program committee with members of Aleppo Secretariat for the national firms.

He briefed the Secretariat members on the measures, legal and security guarantees given to all who wish to return homeland and take part in the national dialogue as well as tackling the files of the abducted, detainees and the gunmen who abandoned weapons to settle their cases.

Members of the Secretariat called for realizing a comprehensive national reconciliation, based on tolerance and amity through holding a national dialogue and committing to the principle of citizenship.