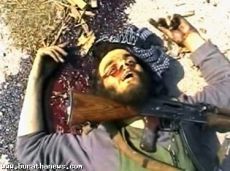 Units of the armed forces on Friday killed and wounded terrorists and destroyed their equipment in several areas in Adra and its surrounding in Damascus countryside.

In the meantime, units of the Armed Forces killed a number of terrorists in a series of special operations against terrorists' dens and gatherings in Jobar, Adra al-Nabik, Zakiya and the Eastern Ghouta, destroying a mortar and a large amount of weapons and ammunition.

An official source told SANA that an Army unit killed all members of an armed terrorist group, including its leader Abo Naeem to the east of Jobar, in addition to destroying two terrorists' dens along with weapons and ammunition inside them in Ein Tarma valley.

The source added that another Army unit destroyed a mortar and killed 13 terrorists in Masraba town in the eastern Ghouta.

Meanwhile another Army unit carried out a special operation in al-Eteiba and killed several terrorists. Among the killed terrorists was Mwayad al-Oweid.

In the same context, other Army units destroyd a convey of terrorists' cars in al-Hmeira area in al-Nabik, killing and injuring scores of terrorists.

In Housh al-Khayat farms in Adra, the Army units killed several terrorists, including a snipers.

Other Army unit destroyed several "Jabhat al-Nusra" dens and gatherings in Zakiya area, killing and injuring all terrorists inside them.

A military source told SANA reporter that the army conducted several operations in the areas of Daraya and destroyed terrorists' hideouts and gatherings.

The source added that a B-10 cannon and a catapult that was used to throw hand grenades on residential areas were destroyed during the operations.

The source said that the army discovered several tunnels and caches and dismantled explosive devices planted by terrorists in the area.

An official source told SANA reporter that the army carried out operations against terrorists in Sukayna Shrine in Daraya and killed 8 terrorists, adding that a terrorist group was eliminated near Ali Ben Abi taleb Mosque.

In al-Sbeineh area, an army unit clashed with a terrorists group and eliminated scores of its members, among them were Imad al-Shahadat, Mahmoud al-Atma and Mohammad al-Falah.

In Hijjera, two terrorist group, one of them affiliated to Jabhat al-Nusra, clashed after dispute over distribution of stolen items.

An official source told SNAA reporter that most of the terrorists were killed or injured in the clash, adding that among the killed terrorists were Adnan Abdul-Amir and Maher al-Ahmad.

SANA reporter quoted an official source as saying that the terrorists opened fire on Colonel Abdullah while he was in his car on his way to his home in Barzeh, causing his martyrdom.

A number of terrorists were killed after a clash erupted between two terrorist groups affiliated to Jabhat al-Nusra over distribution of stolen items in al-Hwaiqa neighborhood in Deir Ezzor.

An official source told SANA reporter that machineguns and hand grenades were used in the clash, adding that all terrorists were killed or injured in the fight.

A military source dismissed as baseless the media report broadcast by Alarabiya TV channel on an explosion in an officers' club in Deir Ezzor.

The source told SANA that the report is baseless, adding that it is part of the fabrications made by the channel as to raise the morale of the terrorists.

The source stressed that the army is continuing operations against the terrorists, especially those affiliated to Jabhat al-Nusra, in Deir Ezzor countryside, adding that a terrorists' gathering was targeted and destroyed in al-Miri'ya town with the terrorists and weapons in it.

Units of the Armed Forces inflicted heavy losses upon the armed terrorist groups who were perpetrating acts of terrorism in a number of towns in Idleb countryside.

Meanwhile, an army unit in Homs managed to confront an armed terrorist group as it was trying to infiltrate from the Lebanese territories into Syria from al-Daly valley in Talkalkh countryside and forced its members to retreat.

The army units also continued pursuing the terrorists in Aabel village to rid the village of them.