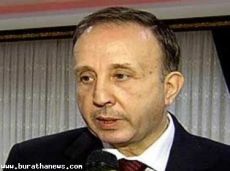 Speaker of the People's Assembly, Mohammad Jihad al-Lahham, called upon the world's parliaments to pressue the governments which are supporting terrorism to stop these acts.

The remarks came in an interview with Cuban "The Workers" Newspaper (Trabajadores) after his participation in the 128th Inter-Parliamentary Union (IPU) Assembly in Quito, Ecuador.

Al-Lahham called upon the international community to exert all efforts to stop violence and massacres committed by the armed terrorist groups in Syria and support the political program to solve the crisis in the country as to preserve Syria's sovereignty and the international security and peace.

He denounced the role of some regional and international countries which are funding and arming the terrorists, adding that the regionally and internationally -backed terrorism targets the Syrian lands and people through destroying the infrastructure and the public and private properties.

Al-Lahham warned against the role of the misleading media outlets and their involvement in misguiding the Arab and international public opinion, condemning the Turkish government that made the Turkish territories a safe haven for the terrorists and a platform to launch terrorist attacks against Syria.

He stressed that Syria is firm in its fight against terrorism and it will prevail thanks to the awareness of the Syrians and their support to their leadership.