Nasrallah: Those who Block Political Solution to Syria Crisis Responsible for Bloodshed 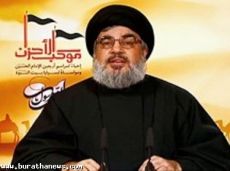 Hezbollah Secretary-General Sayyed Hassan Nasrallah said that those who are blocking dialogue and political solution to the crisis in Syria are responsible for the suffering of the Syrian people and the bloodshed in Syria.

In an address on Thursday, Nasrallah said ''Those are only interested in their own projects and interests and have their own miscalculations…All indicators say that were this battle to drag on with military options, it will be lengthy and destructive,'' pointing out to a possibility for political solution but ''criminals are hindering it.''

Nasrallah called upon the Lebanese government and state to develop their political position in a way compatible with the self-dissociation policy adopted by Lebanon.

''We urge everyone to deal with the issue of the Syrian refugees in Lebanon from a humanitarian perspective and not to politicize this file,'' Nasrallah said, considering that the real solution to the refugees' file consists in dealing with the causes that led to it.

On the kidnapped Lebanese in Syria, Nasrallah said that the countries with influence on the kidnappers are those which are funding and arming gunmen and opening the borders with Syria.

''There are three influential countries capable of closing this file, namely Turkey, Saudi Arabia and Qatar. And Lebanon is a member state of the Arab League and the Organization of Islamic Conference (OIC) and can use its ties in this regard.''j