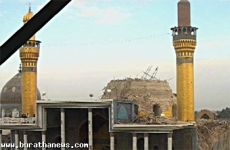 The Salah Uldean state Tribe Leaders’ Council with Tikrit Shoura Council and the Moslems Scholars committee in Iraq announced a hostile and provocative statement against the volunteers who registered their names into the national call to rebuild the Holy shrine of Samara. This call was initiated by the office of Alshaheed Alsader last month.

The tribe council announced it will not allow any group to enter into Samara and expressed deep refusal for the million’s march which will be organized by the Alshaheed office in order to rebuild the shrine which was destroyed by the hatred campaign of the anti shia gangs last February. The tribe council claimed that the citizens of Samara and Salah Uldean govern are able to rebuild the shrine of Imams Ali AlHadi and Imam AlHassan AlAskari (Peace upon them).

The Council declared in the provocative announcement that it will work to fight all groups and militias that want to enter Samara.

At the same time, Samara prepares for expected armed clashes according to journalist sources in the city. Tribe leaders gave orders for their tribes to be prepared to respond to any emergency call to fight. These calls got swift and fast welcome responses from the armed terrorist groups in the city according to the sources. Armed people and gunmen can be seen publicly on the roads and entrances of the city.