Details of the Al Mahmoudiya operation on Friday.Iraqi soldiers killed 5 and injured 13 terrorists. 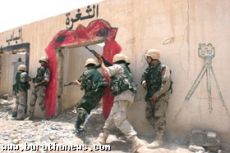 Baghdad- Multinationals forces (22 July) - Iraqi soldiers of Sixth battalion arrested forty seven, killed 5 and injured 13 terrorists following a two hours fighting. It was started today at 11 am after receiving information from a citizen indicated that there were 10-15 gunmen attacking a house in the martyrs area of Al Mahmoudiya. The Iraqi soldiers chased the gunmen into the army area south of Al Mahmoudiya where a battle had occurred in which 5 terrorists had been killed and runaway the rest in a white car.

Then the soldiers followed the terrorists to a house were the car was parked. The car was destroyed by an American helicopter. The soldiers managed to arrest 6 suspects who were hiding in nearby channel and another 3 terrorists into other car. The total number of terrorists and suspects arrested reached forty seven persons.

In this action three soldiers and three policemen were killed.

American officer Thomas commander of the first battalion of unit 502 said: This operation indicates clearly the ability of the Iraqi forces and its commitment to their duty in protection of the citizens. They went to the source of fires straight after the request to help from the citizens which means they are fighting for Iraq and Iraqis.