Killing 11 innocents civilian in Al Musayeb by The American troops 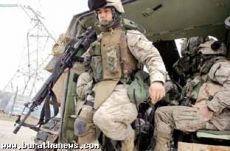 One of the main terrorist leaders of in Almusayab was arrested by the citizens yesterday evening . AlMusayab is near Karbala and border to many terrorists safe heavens like Jurf Al Sakher . The citizens handed the arrested terrorist leader to the police station but the city police commander released him after short period. This incident caused an outcry of public and anger on the police commander who requested the support from the American forces. The civilians took refuge in the Alshaeed Alsader office in the city which was attacked by the American  who ended their operation with killing  of 11 innocents civilians.