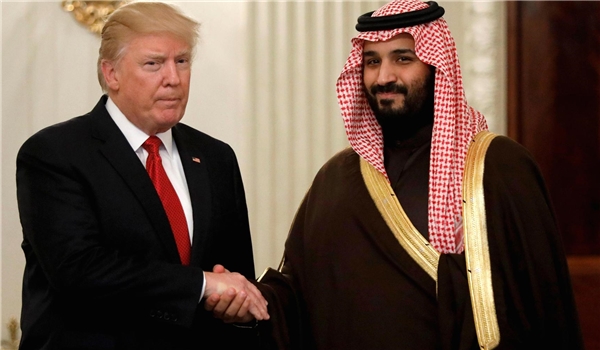 The Crown Prince of Saudi Arabia Mohammad bin Salman boasted that he had the backing of US President Donald Trump for his November "coup", a source in the country said.

Bin Salman, now the de facto ruler of Saudi Arabia, told his close aides that Trump had given his explicit support for a power grab, which involved the arrests of 11 princes and hundreds of officials and businessmen in midnight raids across the kingdom.

A source close to the Saudi leader, known by his initials MbS, told Daily Mail that Salman "bragged" about his cozy relationship with the US President and his son-in-law, Jared Kushner, claiming that the President backed Salman's takeover.

The claim closely matches an insider account in Michael Wolff's explosive book "Fire and Fury" that the President told his friends, 'We've put our man on top!' – implying that he and Kushner had engineered the Saudi coup.

The White House declined to comment to Daily Mail, but Wolff's book revealed the warm relations with MbS and reported how Trump told friends that "Jared's gotten the Arabs totally on our side. Done deal."

Wolff wrote that Salman, 32, befriended Kushner, 37, after the US election, and "offered himself to Kushner as his guy in the Saudi kingdom."

Wolff's book said the relationship between Trump's team and the ambitious Saudi Prince was cemented when the White House chose Saudi Arabia as his first foreign destination as President in May 2017.

Salman and Trump struck a $350 billion arms deal, and in May MbS's father King Salman made him Crown Prince, deposing Prince Muhammad bin Nayef who had been heir to the throne.

And in October, Kushner made a third, secret, trip to the kingdom where The Washington Post reported he "stayed up until nearly 4 am several nights" with MBS, just a few days before the November round-up.

Now Daily Mail can disclose that MbS has told his own inner circle that his support from Trump did not end there, and extends to details of his financial plans.

Trump, he has said, agreed to allow the Saudi leader to seize all the US assets of the Saudi officials he arrested in November, according to the source.

The assets include "real estate, companies, private jets, yachts and huge amounts of cash in short and long term investments", the source added.

"Trump promised MbS the White House will provide all support needed to facilitate the transfer of all cash and assets on US soil belonging to the detained royals to the direct control/ownership of the Saudi embassy in Washington," the source who asked to remain anonymous disclosed.

The source said MbS had said Trump had two conditions for the agreement. First that "all these assets remain in American banks and never ever get transferred back to Saudi Arabia."

The President's second condition was that "the transfer must be based on a power of attorney signed by the detained royals, by the Saudi foreign and justice ministries, and notarized by the US embassy in Riyadh," the source added.

The assets which the Saudi Arabian government wants to seize include the arrested Prince Al-Waleed bin Talal's multi-billion dollar investment company Kingdom Holding. He owns 95 percent of it, having floated five percent on the Saudi stock market.

Other holdings include the Four Seasons Hotel chain in which Kingdom Holdings and Bill Gates are majority owners and a significant stake in Citigroup, the parent company of Citibank.

Al-Waleed owns a yacht formerly owned by Trump and a private Boeing 747 jet upholstered in gold and fitted with a throne – which will also be seized, according to the Saudi source.

Several sources has revealed that the Saudi authorities have transferred the remaining detainees being held at the Ritz-Carlton hotel in Riyadh during a recent alleged anti-corruption drive against businessmen and royals to Al-Ha’ir Prison known as the most high security prison in the Kingdom and used to detain political activists demanding reforms, as well as terrorism suspects.

Saudi Arabia’s richest man, who had refused to make the large financial payments for their release, has been thrown into jail, “hung upside down and beaten” for refusing to pay the Government £728 million as part of an “anti-corruption sweep”, according to a report.

Riyadh has transferred Prince Al-Waleed bin Talal along with others to the nation's highest security prison Al-Ha’ir, South of Riyadh, while during his detention, the prince is said to have been hung upside down and beaten, according to Al-Araby Al-Jadeed news.

Al-Waleed, detained for over two months in an anti-corruption crackdown, is negotiating a possible settlement with authorities but so far has not agreed on terms, according to an official.

"He offered a certain figure but it doesn't meet the figure required from him, and until today the attorney-general hasn't approved it," the official said on condition of anonymity under government briefing rules.

A second source familiar with the Prince's case declared that he had offered to make a "donation" to the Saudi government, which would avoid any admission of wrongdoing, and to do so from assets of his own choosing, but the government refused those terms.

Riyadh had demanded at least $6 billion from Prince al-Waleed bin Talal to free him from detention at the Ritz, according to a report.

His fortune is estimated by Forbes to stand at USD 18.7 billion, which would make him the Middle East’s richest person. His Kingdom Holding, a Riyadh-based investment holding company, owns stakes in hotels like The Four Seasons, Fairmont and Raffles, as well as companies such as News Corp., Disney, 21st Century Fox, Citigroup, GM, Twitter, and Apple.

The money reportedly requested from bin Talal would bite deeply into his global business empire. The prince is trying to persuade the government to instead accept a large share in his company while still leaving him in charge.

An official declared after his detantion that the allegations against Prince Al-Waleed include money laundering, bribery and extorting officials. Neither he nor his company has commented publicly on the charges.

Riyadh has released scores of detainees held at the Ritz hotel during a recent alleged anti-corruption drive against businessmen and royals after they reached deals with the government, while trial proceedings would begin soon for those who continue to deny the charges against them, Saudi daily Okaz reported late December 2017.

The Saudi authorities released scores of the 200-or-so powerful individuals detained since early November 2017 on corruption charges after they reached deals with the government, while trial proceedings would begin soon for those who continue to deny the charges against them.

Dozens of princes, ministers, and former ministers were detained at Riyadh’s luxurious Ritz Carlton hotel on the orders of Saudi Arabia’s so-called Anti-Corruption Committee, which is headed by Crown Prince. The detained individuals are facing corruption allegations but are widely believed to have been victims of a political purge. The royals have also been asked to fork out hefty ransoms reaching billions of dollars in some cases as some have since reached settlements with the government.

The crackdown in Saudi Arabia is widely believed to be aimed at consolidating the crown prince’s grip on power, but it is also speculated that the kingdom is seeking to rejuvenate its economy — hit hard by the fall in oil prices and a costly and protracted war on Yemen — by extorting money from the detainees.

Mohammed bin Salman who has attempted to portray the whole process as an “anti-corruption fight,” has meanwhile been splurging money abroad himself.

In December 2017, it was reported that bin Salman had used a “proxy” to buy Leonardo da Vinci’s painting the Salvator Mundi, which sold for a record $450 million at auction, and a yacht for $500 million. Also, an investigation named Salman as the owner of the Chateau Louis XIV, a mansion outside Paris, which had been sold to him for more than USD 300 million back in 2015.