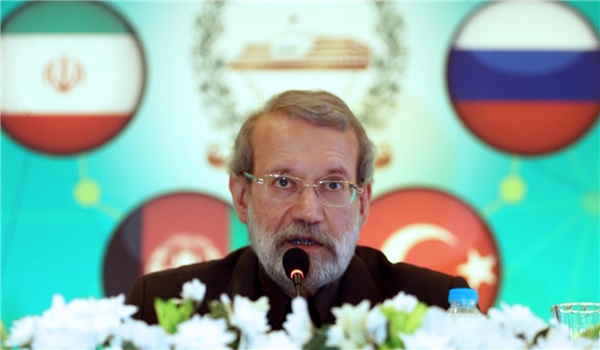 Iranian Parliament Speaker Ali Larijani rapped US President Donald Trump for his "humiliating" comments against the African nations, warning that such moves would widen gaps among countries.

"I voice regret over the US president's remarks. We are moving towards modern barbarism that they provoke countries with their insulting words," Larijani said, addressing the 13th Conference of the Parliamentary Union of the Organization of Islamic Cooperation (OIC) member states (PUIC) in Tehran on Monday.

"No president should humiliate other countries; this will not help friendship among countries and will rather increase the gaps," he added.

Elsewhere, Larijani underlined the necessity for the Islamic states to keep united in campaign against terrorist groups, adding, "The Islamic Republic of Iran is willing to cooperate with all Muslim countries in the fight against terrorism."

His comments came a couple of days after Trump referred to African immigrants as people coming from "s***hole countries".

Trump's comments were allegedly made on Thursday at a White House meeting with lawmakers on immigration reform.

After lawmakers raised the issue of protections for immigrants from African nations, Haiti and El Salvador, the President reportedly demanded to know why the United States should accept immigrants from "s***hole countries," rather than, for instance, wealthy and overwhelmingly white Norway.

Earlier, the 55-nation African Union condemned the remarks, while Botswana and Senegal hauled in the US ambassador to complain.