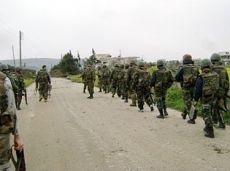 Large-scale military operations were carried out Sunday against terrorist groups in several areas around the country.

Army units carried out operations against terrorists' dens and gatherings in Damascus Countryside, inflicting heavy losses upon them.

SANA field reporter said that the army units killed 15 terrorists and injured 70 others in Yabroud.The army units also eliminated a number of terrorists in the eastern mountains of al-Zabadani.

The source added that another army unit killed many terrorists in Darayaa city, including Hussam Ratib al-Na'ali, while other terrorists were killed in Khan al-Sheeh and its farms.

Meanwhile, the army units destroyed a car loaded with weapons and ammunition in Douma area, in addition to killing all terrorists inside it, including Muhanad al-Dwra and Bassel Yasein.

The army units killed other terrorists in Erbin town and Adra al-Balad.

In the same context, other army units clashed with terrorists in Joubar neighborhood, killing and injuring scores of them.

A terrorist rocket attack which took place on the outskirts of the city of Lattakia on Sunday injured fourteen civilians and damaged a number of residential buildings and cars, according to a source in the province.

The source told SANA that a rocket shell fired by terrorists landed on the main street in Demsarkho area, wounding three citizens and causing damage to a number of cars parked in the site.

A second shell, the source added, hit behind a mall in the residential Project 10th area and caused material damage to a number of residential buildings and cars.

No casualties or damage however was caused by a third shell which landed near the estuary in al-Raml al-Janoubi neighborhood.

Meanwhile, terrorists fired a number of mortar shells on Harasta suburb in Damascus Countryside, causing material damage to the site.

A source at the Police Command told SANA that a mortar shell landed on a residential building in Harasta suburb, causing material damage to the building without casualties among the citizens.

The source added that two other shells fell on the Suburb junction opposite to the Police Hospital, causing material damage to the site.

A military source told SANA that an army unit foiled a terrorist group infiltration attempt from Bustan al-Basha in the city of Aleppo, killing many terrorists and injuringothers.

An army unit targeted a gathering of terrorists near the town of Bannesh in Idleb countryside, leaving a number of terrorist dead or injured and destroying a car loaded with ammo and rockets. Among the dead terrorists was Yehea Qassem al-Sayyed Ali.

Army units eliminated a number of terrorists including Abdelbaset Sawadi near the town of Heish, in addition to wiping out an entire terrorist group in an ambush near the village of Ura including Osama Noah, Jaber Noah, Ahmad Ajineh, and Salwan Khadir, seizing their weapons.

SANA’s field correspondent said that 24 IEDs of various weights were dismantled, in addition to seizing mortar rounds and explosive materials estimated at around 200 kilograms, including bags of C4.

On a relevant note, an army unit eliminated a number of terrorists and injured others in the village of Unk al-Hawa in Homs’ eastern countryside, while another unit prevented terrorist groups from infiltrating the broders from Lebanon near al-Raml area, leaving the terrorists dead or injured.