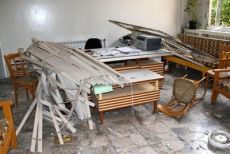 A terrorist explosion rocked Thursday the central province of Hama, claiming the lives of four citizens, in addition to injuring 22 others, a source in the province told SANA reporter.

The source clarified that a car bomb blew up at the southern entrance of Hama city, causing in addition to the casualties among citizens, great material damage to the General Spinning Company and the General Establishment for Poultry and a number of passing cars in the site.

Governor of Hama Ghassan Khalaf inspected the site of the explosion and stressed that “These black terrorist crimes which don’t distinguish between a child, a woman, an elderly or a young man, will only make the Syrians more determined and committed to their homeland.”