Military operations carried out against terrorists in several areas 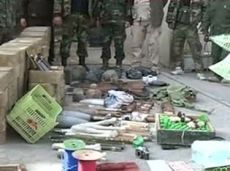 Military operations carried out against terrorists in several areas

Army units continued Monday operations against terrorists' dens and gatherings in several areas around the country.

A military source told SANA that competent authorities seized a bus full of weapons and ammunition on the international road in al-Qtaifeh in Damascus Countryside.

The source added that the authorities seized the bus which was full of machineguns, snipers' rifles and binoculars, arresting the terrorist who was driving the bus.

The army also eliminated many terrorists and destroyed their weapons and ammo in Khan al-Sheih and its farms and in the mountains east of al-Zabadani, in addition to destroying three weapons containing weapons and ammo and eliminating terrorists in the town of Daraya

Terrorist hideouts were destroyed in Aliya farms and al-Hajariya in Douma area, and many terrorists were eliminated including two terrorist group leaders named Hisham Haround and Khaled Othman al-Sheikh, while army operations in the town of al-Mleiha were left dead or injured and their weapons and ammo were destroyed.

A special operation in the town of Erbin resulted in destroying a terrorist hideout and killing many terrorists, in addition to eliminating terrorists and destroying a mortar launcher in Jobar.

A military source told SANA that the army units killed and injured a number of terrorists in the villages and towns of al-Shmiseh, al-Doura, al-Frlouq and Majdal Kikha in the northern countryside of Lattakia, most of them were non-Syrians.

The source added that the army units also destroyed a warehouse full of locally-made rockets and a car loaded with weapons and ammunition.

Army units restored stability and security to the town of Hweijet al-Mreiyia in Deir-Ezzor after killing big numbers of terrorists and confiscating their weapons.

Army units foiled armed terrorist groups’ attempts to infiltrate into Khsrufieh Mosque in the old city of Aleppo and al-Sayyid Ali area, killing and injuring a number of terrorists.

A military source told SANA that army units killed and injured a number of terrorists in Jdaideh and Erbid and destroyed a car equipped with a heavy machinegun with all terrorists inside it in Kwairis.

The source added that other army units eliminated a number of terrorists and wounded others in the industrial area, Bustan al-Qaser, Bani Zaid, Hanano, al-Ameriyeh, Salah Eddin, the old city of Aleppo, Tal Sousin and surrounding Aleppo central prison. The terrorists’ criminal tools were also destroyed

An army unit prevented a terrorist group from sneaking from al-Mashjar al-Janoubi neighborhood in Talbiseh, Homs countryside, and attacking a military checkpoint, leaving the terrorists dead or injured and destroying their weapons.

Another unit eliminated a terrorist group in the town of al-Hosn in Talkalakh area, including the group’s leader Nashwan Kadalem.

A military source told SANA that the army units killed and injured scores of terrorists in the villages and towns of Bkfloun, Kfarlata, al-Nayrab, Failun and Nahlaia in the countryside, destroying their weapons and ammunition.