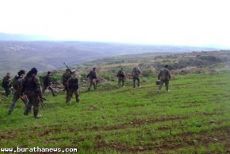 An army unit on Tuesday killed all members of an armed terrorist group on Nemr al-Hara road in Daraa countryside, a military source said.

An army unit destroyed terrorists' dens and gatherings in al-Zara town in the western countryside of Homs and left a number of terrorists killed and injured.

A military source said that an arm y unit eliminated a number of terrorists in Yabroud area, Damascus countryside.

“ Saudi terrorist nicknamed Abu Malek, the leader of the operations of the so-called The Islamic Front, Sameer Nasrallah Rahmoun, the leader of interior security militia, and Mahmoud Arouk, nicknamed Abu Ali al-Yabroudi, the financier and leader of the operations of the armed terrorist groups in the area, Anas Abboud and Ruken Methqal Hamameh from the so-called Haraket Ahrar al-Sham were identified among the dead.” The source told SANA.