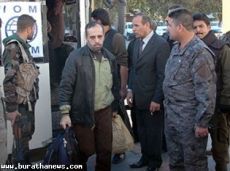 Governor of Homs Talal al-Barazi said that cases of 35 persons, aged between 15-55 years old, who were evacuated from Old City of Homs neighborhoods were settled.

Meeting the persons whose cases were settled today, the governor pointed out to halting the evacuation operations today because some armed groups prevented the citizens inside from moving to the crossing points to outside the old city.

He added that the situation of the young men whose cases have not been settled yet will be studied in 4 days according to the legal situation as some of them will benefit from the amnesty law and some might go to court within a legal framework.

The evacuation process from the Old City of Homs was launched according to a deal between the governor and the UN Resident representative in Syria.