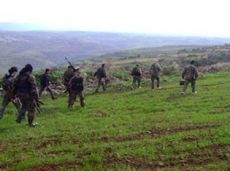 Army units on Thursday carried out wide military operations against terrorists' dens and gatherings in several areas around the country.

Units of the armed forces carried out operations against terrorists' den and gatherings in the northern countryside of Lattakia, inflicting heavy losses upon them.

A military source told SANA that the operations resulted in destroying 4 cars loaded with weapons and ammunition.

The source added that among the dead terrorists were Khalid al-Nasir, Abu al-Zobeir and Abu Othman al-Turkey.

One citizen killed, eight injured due to terrorist attacks in Damascus countryside

A citizen was martyred and 8 others, among them women and children, were wounded due to terrorist attacks in Jdaidet Artouz and Harasta Highway in Damascus countryside.

A source at the Police Command told SANA that terrorists targeted with two mortar shells a funeral procession near the Church in Jdaidet Artouz, killing one citizen and wounding 5 others, among them a child.

The source added that terrorists opened fire at passing cars and buses near the Water Unit on Harasta highway, wounding three citizens and causing material damage to five cars and a bus.

Terrorists targeted the main power plant feeding electricity to Daraa city and Khurbet Ghazaleh with mortar shells, causing the injury of two workers and the power outage in the city.

Chairman of General Electricity Company in Daraa Nasir al-Khalid said that two workers were injured because a mortar shell hit the power plant of Khurbet Ghazaleh that provided power to the city of Daraa.

He added that the terrorist attack caused large material damage to the station's control panel resulting in the outage of the electrical power in Daraa.

Al-Nasir pointed out that the main power plant at the eastern entrance of Daraa city was also attacked by terrorists' shells, causing material damage to the station.

In the same context, a fire was erupted in al-Yarmouk mill due to mortar shells landed in the mill's yard.

Chairman of the mill, Bassam Baker said that fire brigade controlled the situation and prevented the fire from spreading to the main building in the mill.

A military source told SANA that the army units targeted scores of terrorists on al-Saad road and the villages of al-Qsaybeh, Ein al-Abed, al-Sweiseh, Hamer and al-Hajeh in the countryside, killing many terrorists, most of them were from Saudi Arabi, Qatar and Jordan.

The source added that among the dead terrorists were Muhannad Abdullazez al-Shmari and Adel Ibrahim al-Ghamidi from Saudi Arabia and Ibrahim Samer al-Radsan fron Jordan.

A military source told SANA that an army unit targeted terrorists in Smileen town and al-Bajabjeh neighborhood, killing and injuring scores of them.

An army unit foiled an armed terrorist group's infiltration attempt from the Lebanese territories into Talkalakh in Homs.

A source told SANA that tens of terrorists attempted to infiltrate from Lebanon through Azer site into Talkalakh, pointing out that an army unit in cooperation with border guard personnel confronted them and killed many of the terrorists.

The source added that the army unit destroyed machineguns and ammunition the terrorists attempted to transfer into the Syrian territories in a bid to support other terrorists who are exposing fetal blows in al-Zara town by the army.

Other army units killed and injured many terrorists in al-Rastan city, while another army unit killed all members of an armed terrorist group who were attempting to sneak to Ashroneh village in the eastern countryside of Homs, in addition to destroying a car loaded with weapons and ammunition.

Dozens of terrorists killed in the area between Hama and Idleb

Moreover, An army unit killed a big number of terrorists in the towns of al-Tah and Arnaba between Hama and Idleb countryside, a military source said.

The source added that some of the killed terrorists are from Saudi Arabia, Jordan and Iraq.

In the same context, the army units repelled scores of terrorists who were attempting to attack Abu Duhour Airport, killing and injuring a large number of them.

Among the dead terrorists were Abu Abdullah from Libya, Abu Mus'ab al-Baghdadi from Iraq and Khalid Mohammad Sarhan.

Units of the army eliminated scores of terrorists and destroyed their weapons and ammunition in a series of operations in Yabroud and Jairoud, al-Rhibeh, Darayya, Khan al-Sheih, Mliha, Zibdin, and Jobar in Damascus countryside.

Sources told SANA reporter that terrorists from so-called “Jabhat al-Nusra” were killed and many others were injured, in addition to destroying their dens and vehicles.