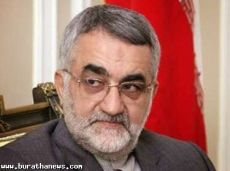 tweet
Chairman of the Committee on National Security and Foreign Policy Council of the Iranian Parliament, Alaeddin Boroujerdi, said Sunday that the sides causing the crisis in Syria seek to expand their activities to countries of the region including Iraq and Lebanon.

In a statement, Boroujerdi stressed that the defeat feeling of the sides causing the crisis in Syria is a result of the steadfastness of the resistance axis in the region.

He underlined that the Saudi regime's role in the terrorist crimes committed by the so-called, al-Qaeda-linked, "the Islamic State of Iraq and al-Sham" in Lebanon, Syria and in the region is "an irrefutable fact."