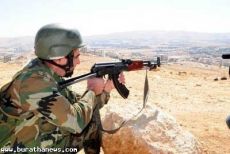 Units of the armed forces on Thursday carried out several operations against terrorists in a number of areas in the country, killed and injured terrorists and destroyed their hideouts and gatherings.

A military source said that army units discovered during their pursuit operations in Qara city in Damascus Countryside a hideout of terrorists' leaders and a network of tunnels containing big amounts of weapons, ammunition and a workshop for manufacturing explosive devices that included scores of charges weighing 80 kg each, in addition to seizing big amounts of stolen medical tools and equipment.

The source pointed out that an army unit foiled, in cooperation with guard forces, a terrorist group's infiltration attempt from the Lebanese Arsal town into al-Qalamoun area, killing or injuring all of its members.

Meanwhile, a special operation in Douma city resulted in the killing of numbers of terrorists, including Anas Aibour, while members of an armed terrorist group from the so-called "Dur' al-Asimeh Brigade" got killed in the city.

According to the source, units of the armed forces razed terrorists' gatherings and dens in al-Nashabiyeh, al-Bahariyeh, al-Abbadeh and al-Qissa in the eastern Ghouta, killing a number of terrorists. Taher Tinawi and Akram Sleik were identified among the dead.

Another army unit, the source said, killed a number of terrorists and destroyed their weapons and ammunition in Deir al-Asafir town. Mahmoud al-Khen was identified among the dead.

A series of operations were also carried out in Babila town during which a number of terrorists affiliated to Jabhat al-Nusra were killed, including Mohammad Arisheh.

An army unit clashed with an armed terrorist group in al-Zabadani city and killed and wounded most of its members. Ahmad Murad was identified among the dead.

In Barzeh neighborhood in the city of Damascus, another army unit destroyed a terrorists' den along with the weapons and ammunition inside and killed a leader of an armed terrorist group and a number of his group.

A military source in Aleppo told SANA that army units destroyed terrorist cars loaded with weapons and ammunition in the area surrounding the Industrial City in Sheikh Najjar and in Handarat, Maaret al-Artik and al-Rashidain.

An armed terrorist group was completely eliminated with all its members killed and 4 of their cars which were loaded with weapons and ammunition destroyed in Handarat.

Other army units eliminated armed terrorist groups in al-Mansoureh, the Journalists Association and Sheikh Saeed and in the surrounding of the Central Prison and al-Kindi Hospital, the source added.

A mortar and a number of rocket launch pads for terrorists were destroyed in the villages and towns of al-Jadideh, Kweires, Rasem al-Abboud, Blas, Binan, and Erbid, in addition to destroying a 23mm anti-aircraft machine gun mounted on a car in Khan al-Assal.

Units of the armed forces clashed with two armed terrorist groups that tried to attack residents in Salah Eddin neighborhood and Brakat al-Arman, killing most of their members.

In the meantime, all members of an armed terrorist group were killed and injured in al-Marjeh neighborhood in Aleppo city and their weapons destroyed, which included machine guns.

Dozens of terrorists killed, their weapons destroyed in Daraa and Quneitra

Army units killed dozens of terrorists in villages and towns in Daraa and Quneitra, and destroyed their dens and gatherings with all weapons and ammunition inside.

An official source said that a number of terrorists who belong to the so-called 'al-Moutaz-Bellah Battalion' were killed in Atman town in Daraa countryside including the terrorist Firas Anwar al-Masri, while another unit destroyed an armed terrorist group's den in al-Wardat village to the southern-east of al-Lajat area, killing all the terrorists inside.

The source added that an army unit clashed with an armed terrorist group in al-Nasira town in Nawa, killing most of its members including the terrorists Abdul-Elah al-Bashir and Akram al-Hariri.

In Quneitra, a military source said that an army unit destroyed terrorists' gatherings in Bariqa town, killing many terrorists and injuring the others