Pal. Sisters as Keepers of their Brothers inside Emergency Damascene Shelters 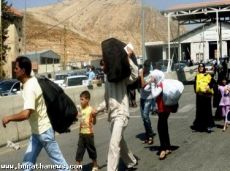 This brief update is not focused on the ever deteriorating grave conditions of Palestinians and Syrians displaced and often trapped inside dangerous areas on Damascus, where this observer had been visiting some of the 24 former Damascus public schools currently being used as shelters.

Rather it seeks to highlight the esprit de corps, solidarity, resistance, and good will among Palestinians here in Damascus who were forced from Yarmouk and other camps and how they are huddled and preparing for a harsh winter which one senses these frigid nights it not far off.

This is not to gainsay that every shelter is a very fragile social existence for Internally Displaced Persons (IDP’s) as aid agencies here refer to them. In the former schools there is no mazot (fuel oil) currently available to fire-up the furnaces and the among the needs at all the shelters are for "high-thermal" blankets, food, medicines winters clothe and shoes and knitted caps for the kids trekking early in the morning to government schools in the neighborhoods.

Palestinian family, FranklinThanks to the continuing cooperation between the Syrian government, particularly the Ministry of Education (MOE), and the United Nations Relief and Works Agency for Palestine Refugees in the Near East (UNRWA) many former public schools have been made available as emergency shelters. Additionally, the MOE has created double shift in many schools offering youngster a 7 a.m. to noon shift followed by a noon to 5 p.m. shift.

Prior to the armed conflict in Syria, Yarmouk, a suburb just south of Damascus city, was home to over 160,000 Palestine refugees. In December 2012 and in the months since, armed conflict has caused at least 140,000 Palestine refugees to flee their homes in Yarmouk, as armed opposition groups established a presence in the area, with government forces controlling the periphery. Between December 2012 and June 2013, civilians could still access UNRWA assistance at the Zahera entrance to Yarmouk. However, from mid-July 2013, Palestine thousands of refugees have been trapped in the area, with little or no access to shops or freedom of movement.volunteers running shelters

At among the 4 school-shelters in south Damascus near Yarmouk camp and the 8 in the nearby neighbored of al-Vvahra, some of which this observer visited, “The Fayadeen” elementary public school currently houses 56 families- half of them Palestinians totaling 260 people. At “Fayadeen” there is a clean large make-shift kitchen where approximately half a dozen families use at one time based on a schedule. The Syrian government and some NGO often deliver emergency food packages—most designed to feed a family of five for 15 days. “Fayadeeen” school also has a heavy duty Italian electric washing machine donated by a Palestinian businessman and which is shared by all. There is a high level of sanitation and sheds housing toilet are clean. Three times a week medical teams arrive to administer free government health care. US sanctions have cut off some urgently needed medicines, particularly for cancer patients and cases where weekly doses of medicines are required but often only monthly doses are now available. Shelter rules are enforced. For example, if a family does not enroll their 6-15 year old children in local public schools they are evicted. This observer was briefed at length and shown around by two Syrian professions basketball players on the National team, Hani and Mohamad who have placed their careers and family life on hold to manage four school shelters in a south Damascus.

Al-Monadil (struggler) SchoolSeveral Palestinians in the school shelters have been asking this observer if he has news about their countrymen still trapped inside Yarmouk. There is of increasing concern because their families report that desperately needed humanitarian assistance is still not able to be not delivered nor have repeatedly promised “humanitarian corridors” opened, This despite and despite UNRWA’s numerous appeals and efforts, 32,000 Palestinian civilians and others who remain trapped in Yarmouk have had little or no freedom of movement or access to humanitarian assistance and in addition to facing death and serious injury from the armed conflict, Yarmouk’s civilian residents are exposed to psychological trauma, malnutrition and a lack of health care. The UN Security Council’s Presidential Statement on the humanitarian situation on Syria adopted on 2 October, 2013, among other stipulations called on all parties to grant full humanitarian access and “to comply with their obligations under international humanitarian law.”

Hope among the more than 100,000 refugees displaced from Yarmouk camp rises and sinks with on again off again announcements that militia will leave the camp to civilian Palestinian administration. Just this week a claimed settlement involving intense negotiation mediated by the Palestine Liberation Organization (PLO) to end the fighting in Yarmouk camp suffered collapsed, after opposition fighters close to Hamas insisted that they be included among the groups that will subsequently manage the affairs of the camp. PLO officials had recently arrived at a preliminary agreement with the various Palestinian factions and opposition armed groups that would lead to a ceasefire but excluded Hamas and the PFLP-General Command led by Ahmed Jabril. Within 72 hours another and still showing life signs, another proposal was announced on 11/22/13. Under the terms of this “agreement”

Palestinian Popular Struggle Front Khaled Abdul Majid , that “the armed groups in the Yarmouk camp aka the“Palestinian Resistance Alliance factions” would be withdrawing from the camp “very soon”. In statements to Al-Watan, Abdul Majid said: “What is happening in Yarmouk is that most of the armed factions have reestablished contact with the Popular Front for the Liberation of Palestine – The General Command, as well as the factions of the Palestine Resistance Alliance, after the initiative of the Palestine Liberation Organization (to solve the camp’s crisis) failed. These factions thus expressed their willingness to regulate their situation, handle the issue and withdraw from the camp.” He continued that the discussions with these groups were conducted via mediators, or in some cases through contacts with some of them.

This observer has witnessed the fact that since 11/17/13 almost complete calm has been prevailing over Yarmouk. Services teams from the Palestine Aid Committee have been cleaning the camp’s streets and removing the dirt mounds. This observer has been invited inside Yarmouk to witness this process. Government permission is required and date of entrance is not fixed.

Some refugees from Yarmouk are hopeful but during interviews the past two days most expressed doubt that this latest initiative will succeed any more than the previous dozen. The coming few days will provide the answer.

Palpable fear is also evident because of the fast approaching winter with rumors of severe cold this year, A condition that will be much more severe among the 250 camps in the nearby Lebanese Bekaa valley particularly for the 25 plastic wall and roof make-shift tents in 25 emergency refugee camps that are particularly flood-prone and shared by Syrian and Palestinian refugees.

Our brother and sisters keeper…

Hopefully subsequent updates on the Palestinian condition in Syra will allow for rather more detail regarding many examples of Palestinians helping Palestinians regarding community assistance to their sisters and brothers. But a brief example about a wonderful family is fixed in this observers mind.

It relates to the Khalid al Jrahi family from Haifa now living in “Taher al Jazari” public school shelter. Mr. al Jrahi granted permission to this observer to use his name publicly because he wants friends and relatives with whom he has lost contact since the events of December 17, 2013 which leveled some of his neighborhood in Yarmouk, to know that his family is alive and relatively well.

What a spectacular family. Including five teen-aged and early 20’s girls and two boys. What deeply impressed this observer is the esprit among these sisters, their charisma, charm and dedication to helping others among the approximately 260 refugees sharing the school while eschewing complaints about the own plight. The Al Jrahi family lives in a space probably ten feet wide and 20 feet long. Foam mattresses are neatly stacked along the walls and pillows and clothing stacked in the corners. A clothes line runs along one side of the room which is walled by an UNHCR white and blue lettered plastic tarp separating their neighbors. Shocking? Yes, but inspiring certainly. The girls, whose English is quite good explained why and how they set up a school for pre-K’s in this and one other shelter. How organized it is. They showed me the ‘teaching manual’ they wrote and explained how they run their schools with occasionally donated pencils and crayons and notebooks for thee tots donated by a Palestinian NGO’s or even foreign visitors.

We did not discuss politics but two of the sisters reminded me of Hala, Jane Austen’s character Eleanor, in Sense and Sensibility. Hala is the sensible and reserved eldest of al Jrahi family daughters. She is in charge of the lesson plans for he informal ‘sisters schools’ in the shelter and carefully instructs her younger impetuous Zeina on school rules for the children, trying to keep her attention and her younger sister focused. Hala showed this observer her English grammar notes that she in learning from a tattered UNWRA grammar book. She points to her perfect cursive hand written notes and asks me about “present participles”, “dangling modifiers” and “past perfect tense”! When I last even heard these terms it was half a century ago and I have no idea what the even mean-- if I ever did which is questionable.

Her younger sister Zeina is all Austen’s character Marianne, and refuses to check her emotions and dramatically insists that she is ready to return to Yarmouk “despite the dangers even if I am killed going back home!” Her mother Fatima grimaces and Hala is disapproving when Zeina insists that she should teach the children dancing in the street outside the closed in-shelter as well as tree climbing so they “can properly express themselves under the sky.”

Rather wistful and not wanting to leave this family or the shelter, this observer and his companion left the wonderful Al Jrahi family wondering if Ms. Sense or Ms. Sensibility would triumph or if these two remarkable sisters in fact constituted a good balance to one another as they serve their fellow countrymen in emergency shelters