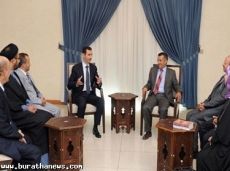 President Bashar al-Assad received on Thursday a Yemeni delegation comprising a number of political figures and MPs of the Yemeni Parliament.

During the meeting, President al-Assad stressed that the threats to launch a direct aggression on Syria would only bolster its adherence to its firm principles and independent decision which stems from the will of its people, emphasizing that Syria will defend itself against any aggression.

"Syria, with its steadfast people and brave army, will continue eliminating terrorism which is utilized by Israel and the western countries to serve their interests in fragmenting the region," President al-Assad said.

The President pointed out that the popular awareness on the Arab arena is an essential element in confronting the schemes targeting the region, stressing that the peoples are the genuine makers of relations among countries and the popular state guarantees victory and this is what is happening in Syria.

Members of the delegation stressed support to Syria in face of all attempts aimed at undermining its position and role as a bastion of Arabism, nationalism and resistance, considering that Syria's steadfastness and victory echo that of the Arab nation as a whole.

Following the meeting, members of the delegation said that President al-Assad has explained the crisis in Syria with credibility through which they reached a conclusion on the scale of the victories gained by the Syrian Arab army.

"The meeting with President al-Assad boosted our feeling in confidence that we are waiting and hoping victory," Abdullah al-Maktari, an MP said.

Member of the Yemeni National dialogue najeeba Mathar said that the delegation came to Syria to assert that it will confront terrorism and those who are supporting it, expressing confidence that Syria wouldn't allow anyone to affect its sovereignty.