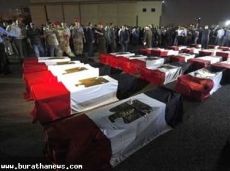 An Egyptian security source said that Badie, and other senior leaders of the Muslim Brotherhood, and 6 of his guards and aides were arrested in an apartment near Rabiaa al-Adawiya area.

The source added that Badie and his aides are wanted for investigation, asserting that they were deported to Tora prison.

An Egyptian Interior Ministry source said that the police forces deported Badie to a prison to be questioned by a public prosecutor's special team .

Badie and his deputies Khairat al-Shater and Rashad al-Bayoumi were accused of inciting the killing of peaceful protestors and fueling violence in the events of the Republican Guard and Ramses square last July.