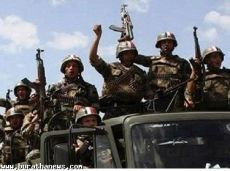 Units of the armed forces on Sunday continued operations targeting terrorists' gatherings and dens in several provinces in which they killed scores of terrorists and destroyed their weapons and ammunition.

An official source told SANA reporter that the operation resulted in killing most of the group's members including its leader Rateb Sreiwel.

Another army unit destroyed a den for terrorists affiliated to Jabhat al-Nusra in the same area and killed all of them, including Mohammad al-Mleih.

The source mentioned that army units inflicted heavy losses upon members of armed terrorist groups, killing many of them and injuring others near Daya car company and a school complex in the city of Harasta. Terrorist Bassam Harastani was identified among the dead.

Army units continued chasing terrorists from Jabhat al-Nusra in al-Ziyabiyeh town in the southern countryside of Damascus, killing a number of them and destroying the machineguns and a mortar they had with them. Terrorist Yamen Asaad was identified among the dead.

In al-Husseiniyeh town, a terrorists' den was destroyed along the weapons and ammunition inside it. All the terrorists inside the den were also killed, including Asaad al-Yehi

A special operation carried out by an army unit in Hijjeira town resulted in destroying a heavy machinegun and killing all members of a terrorist group, among them were Tareq al-Ahmad and Ayman Daqdouqa.

Army units seize terrorists' communication sets, kill scores of them in Homs and its countrysid

Units of the armed forces killed and injured several terrorists in Homs and seized their communication sets in Palmyra countryside.

A military source told SANA that the army units killed large number of terrorists near Hanoura dam, al-Bayarat al-Garbeh and Manoukh village in Palmyra, in addition to seizing their communication sets and P10 launcher.

The source added that the army units killed and injured scores of terrorists in al-Qosour, al-Qrabis, al-Wa'arand Bab al-Sba'a neighborhoods, targeting terrorists' dens and gatherings in Burj Ka'ai and Taldo villages in al-Houla, in addition to destroying a heavy machinegun in Ein Hussein village.

Units of the armed forces killed all members of an armed terrorist group in Kafar Rouma, Khan al-Subul, Hish, al-Arba'ein mountain and Bzabour and destroyed their weapons and ammunition.

The army units in Aleppo foiled an attempt by armed terrorist groups to infiltrate into safe areas in the neighborhoods of Saif al-Dawleh, al-Zabadiyeh, al-Ashrafiyeh and Bustan al-Basha in the city, an official source told SANA reporter.

The source stressed that most of the terrorist groups' members were killed.

Meanwhile, an army unit, the source added, destroyed a rocket launch pad, a number of mortars and amounts of weapons and ammunition loaded in terrorists' cars in the villages of Kweiris and al-Jadida in the southwastern countryside of Aleppo.

Army units also destroyed a number of terrorists' gatherings on al-Mislmiyeh road and in the surroudnign of Deir Jmal village, while others killed many terrorists in Khan al-Assal area and Byanoun village in the southwestern countryside.

SANA reporter quoted the source as saying that an army unit destroyed a rocket launch pad in al-Dweirineh village in the southern countryside.

Other units of the armed forces carried out several operations in which they destroyed weapons and ammunition loaded in terrorists' cars in Tadef village to the south of al-Bab city.

A number of armed terrorist groups were eliminated with their weapons destroyed on al-Bab-Aleppo road and on al-Atareb-Aleppo road in the northeastern countryside of Aleppo city.

In the meantime, a unit of the armed forces raided a den for an armed terrorist group in al-Faihaa neighborhood in the city of Hama, according to a military source.

The source stressed that the army unit seized various types of weapons and ammunition in the den and killed almost all of the terrorist group's members.

The group's leader Hisham Abdul-Razzaq al-Sahhar was identified among the dead.

The source said that terrorist's attempt to remotely detonate 4 explosive devices, each weighs 50Kg, near Tebneh Bridge in Daraa countryside, were foiled.

The source pointed out that units of the armed forces destroyed terrorists' hideouts in Tafas, Ein Ziker, Saida, al-Bassaleh, Nawa, Tsil and Da'ael , killing all the terrorists inside them.

Other army units killed large number of terrorists in the villages and towns of Ein Zakar, Saida, Da'al, al-Basala, Nawa and Tsil in Daraa countryside.

Salim Ahmad al-Zoubi and Abdullah Aba Zaid were identified among the dead terrorists.