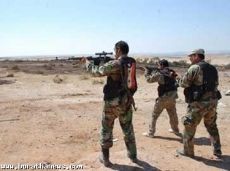 Units of the armed forces killed large numbers of terrorists and destroyed a weapons warehouse and rocket launch pads in different areas in Aleppo and its countryside on Tuesday.

A military source told SANA reporter that army units destroyed terrorists' gatherings along with mortars and rocket launch pads in the villages of al-Jdeideh village and Kweiris. Many terrorists were killed and injured in the operations.

The source added that terrorists were killed in the surrounding of the Central Prison of Aleppo and in the areas of Bani Zaid, Khan al-Assal and al-Lairamoun. Terrorists' dens were also destroyed to the south of Rasm al-Abboud village and al-Atareb area.

An army unit, the source said, destroyed a weapons and ammunition warehouse and dens for armed terrorist groups to the west of al-Bab city, while another army unit destroyed a terrorists' gathering in Tall Ayyoub village in the eastern countryside of Aleppo.

Meanwhile, units of the armed forces confronted members of terrorist groups who tried to sneak into al-Kindi Hospital and into the neighborhoods of Salah-Eddin, Suleiman al-Halabi and al-Sweiqeh, leaving many of them dead and wounded.

Army units eliminate terrorists in Deir Ezzor and its countrysid

Units of the armed forces carried out operations against terrorists in Deir Ezzor and its countryside, killing and injuring several terrorists, including non-Syrians, and destroying their dens along with the weapons and ammunition inside them.

An official source told SANA that the army units clashed with terrorists in al-Hweiqa, al-Rusgdeh, al-Sheikh Yasin and al-Syna'a neighborhoods, killing and injuring a number of them, including terrorist called Abu Osama from Tunisia, Kamal al-Sayah who was a leader of an armed terrorist group, Ahmad Khaza'al and Ismael Atallah Haded.

The source added that the army units killed a leader of an armed terrorist group called Abu Dujana and a number of his group's members in Sita Ila Roub'a street, in addition to destroying terrorists' dens and weapons in Hweijet Kateia and Hweijet Sakar.

It pointed out that an army unit targeted terrorists' gatherings in al-Shheil and al-Bseira towns and destroyed a number of cars loaded with weapons and ammunition at al-Hrbaisheh crossroad on Deir Ezzor-Palmyra road.

Another army unit killed and injured all members of an armed terrorist group in al-Husan village in the western countryside of Deir Ezzor.

Hussein Faraj al-Bseis was identified among the dead terrorists.

In cooperation with the citizens, a unit of the armed forces repelled terrorists who were attempting to attack Talladai and Khalfeh villages in al-Mkharam area to the east of Homs.

An official source told SANA that an army unit pursued terrorists who fired at citizens, killing and injuring a number of them.

The source added that other army units killed all members of an armed terrorist group who were perpetrating acts of terrorism in Jub al-Sada in Haseia'a area and seized their weapons.

Terrorists' dens destroyed in Damascus and its countryside

A number of Jabhat al-Nusra terrorists, some of them holding the Palestinian and Tunisian nationalities, were killed in a series of operations targeting their dens in the Eastern Ghouta and a number of villages and towns in Damascus and its countryside.

SANA reporter quoted an official source as saying that an army unit destroyed a mortar and a bulldozer which the terrorists had used in setting up barricades and blocking roads in Barzeh neighborhood in the city of Damascus.

The army units, the source added, killed numbers of terrorists in the farms surrounding Tishreen Hospital in the neighborhood. Among those was Anas al-Aghwani, leader of an armed terrorist group.

An army unit killed all members of an armed terrorist group in Erbin town, while another unit clashed with terrorists in the surrounding of al-Manasher roundabout and killed most of them, including Mohammad Sawwan.

In the Eastern Ghouta in the countryside, units of the armed forces carried out a series of special operations against terrorists' dens in the towns of Deir Salman and Hteitat al-Turkman, killing many terrorists, according to the source.

Burkan Kamal and Mwafaq Karim, leaders of two armed terrorist groups, were identified among the dead.

The source also mentioned that a unit of the armed forces hunted down a terrorist group in Ashrafiyat al-Wadi and killed a number of its members.

Another army unit carried out special operations against gatherings for Jabhat al-Nusra terrorists in Yabroud. Tens of the terrorists were killed and others were injured with their weapons destroyed.

The source told SANA reporter that many terrorists affiliated to Jabhat al-Nusra were killed in the towns of al-Ziyabiyeh and Hijjeira. Terrorist Sami al-Ahmad from Palestine and Mohammad Yehia Mandil, who is leader of an armed terrorist group, and a number of his group's members were identified among the dead.

Two terrorists' dens were targeted in al-Husseiniyeh town, which resulted in killing and injuring all the terrorists inside them and the destruction of their weapons and ammunition.

The Tunisian terrorist al-Taher Bossnin was identified among the killed terrorists.

An army unit also eliminated members of an armed terrorist group and destroyed their equipment in Yelda town.

With the help of locals, the authorities uncovered a large workshop for manufacturing explosive devices in the Eastern Ghouta area.

The workshop also contained equipment and supplies used for manufacturing explosives such as French-made remote control equipment, precise measurement equipment, some of them made in the Czech Republic, British-made paper for measuring pH levels in solutions, detonators, a cooling device, molds and metal containers.

In Lattakia, units of the armed forces killed numbers of terrorists, including non-Syrians, in the surrounding of the villages of Obin and al-Hanboushiyeh and Prophet Isaiah Mount in the northern countryside of the province.

A military source told SANA that large amounts of ammunition and weapons, including heavy and medium machineguns, were destroyed in the operations.

The source noted that a Kuwaiti sniper nicknamed Abo Anas and a Jordanian terrorist called Ali Shaaban were identified among the dead, in addition to 9 Moroccan terrorists from the so-called "Al-Sahel Brigade".

In the same context, units of the armed forces clashed with an armed terrorist group that tried to sneak fron al-Sina'eh neighborhood into al-Rasafeh neighborhood in the city of Deir Ezzor, killing most of its members, including a sniper.

SANA reporter quoted an official source as saying that a number of terrorists' dens and a weapons warehouse were destroyed near the Municipality building and in the neighborhoods of al-Hweiqeh, al-Jbeileh and al-Orfi in the city.

A gathering for terrorists was also destroyed in al-Mreiyeh village, the source added.

A number of terrorists were killed in a car bomb as they were loading it with explosives in al-Hardaneh village in al-Salamieh district in Hama province, a military source said.

In a statement to SANA, the source added that the explosion caused the destruction of the den in which the car was being prepared, and all terrorists inside the den were killed.