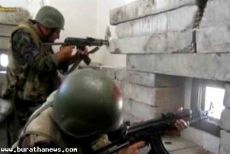 SANA reporter quoted Head of the Company of Homs branch, Suleiman Jweikha, as saying "A terrorist group targeted al-Wassita station to the west of al-Zara town in Talkalakh countryside with mortar shells, damaging the station's tanks and causing fire in them where 688 cubic meters wer burnt.

He clarified that fire fighters from Homs and Tartous Provinces put the fire off at 12 am.

Units of the armed forces targeted armed terrorist groups' hideouts in several neighborhoods in Homs and its countryside, inflicting heavy losses upon them.

The army also killed and injured a number of terrorists and destroyed their weapons.

The source added that another unit of the army confronted armed terrorist groups' attack against military checkpoints in Palmyra, killing a number of terrorists and destroying their tools.

Among the terrorists killed in this clash were Ahmad Salameh al-Zarqan, Hisham Oudeh and Jaber Abu Nahleh.

Another unit clashed with a terrorist group in al-Naserah neighborhood in Teldo, injuring a number of terrorists and killing others including Safwan al-Alloush and Yasser Adnan al-Saleh.

In Deir Ezzor, in a qualitative operation, a unit of the army destroyed Jabhat al-Nusra terrorists' gathering in Kabajib village on Deir Ezzor-Damascus highway.

SANA reporter quoted a source in the province as saying that the operation resulted in the killing and injury of a number of terrorists.

The source added that another unit of the army eliminated an armed terrorist group in Huwijet Saker and destroyed weapons ammunition which they were trying to enter to Deir Ezzor city.

Units of the Syrian Arab Army eliminated terrorists belonging to Jabhat al-Nusra, including leader of so-called "al-Fatih al-Nasser brigade" in a series of operations against their concentrations in Damascus countryside.

An official source told SANA reporter that the army destroyed a heavy machinegun and an anti-aricraft cannon, in addition to killing 30 terrorists in al-Hajar al-Aawad town.

In the eastern Ghouta, units of the army carried out a series of operations killing scores of terrorists near the Martyrs Square in Douma city.

Meanwhile, the army killed two leaders of armed terrorist groups in Jobar, and other units continued operations in al-Qaboun and killed scores of terrorists.

An army unit destroyed a terrorists' command center in Barzeh neighborhood in Damascus Countryside, killing all the terrorists inside and destroying their weapons and equipment.

A number of citizens were martyred and many others wounded Sunday as a suicidal terrorist man blew himself up in one of the populated areas in Dir Attiyah, Damascus countryside.

"A suicidal man blew himself up with huge quantities of explosives in a car amid a residential area in Dir Attiyah in Damascus countryside, claiming the lives of a number of citizens, among them a child, while many others were wounded," A source at Damascus Countryside police told SANA.

The source added that the terrorist explosion caused material damage to the citizens' properties.

The source added that the three terrorists were arrested during an operation carried out by the Syrian Arab Army in al-Rmeileh village east Hama.

Four citizens were injured on Saturday as two mortar shells launched by terrorists fell on Suleimanieh neighborhood in Aleppo city.

An official source told SANA reporter that two mortar shells fell near a restaurant in the crowded neighborhood, causing the injury of four citizens, including a girl, in addition to material damage.

The people of Bustan al-Qaser neighborhood in Aleppo city staged a mass demonstration demanding that armed terrorist groups be removed the neighborhood and that an end be put to their crimes.

SANA's correspondent said that hundreds of locals from the neighborhood participated in the demonstration, with the locals denouncing the terrorists' crimes which caused a loss of safety and security and shortages of basic necessities.

The locals also voiced full support for the Syrian Army in its operations against terrorists in Aleppo and its countryside.

A unit of the armed forces targeted terrorists' dens and gatherings in several areas in Hasaka countryside, inflicting heavy losses upon them.

An official source told SANA that the army units destroyed terrorists' dens along with the weapons and ammunition, in addition to killing all terrorists inside them in Tall al-Tayb, Tall al-Naser, Awaina, al-Rahba and Khazna in al-Kamishli area in Hasaka countryside.

The source added that another army unit killed and injured several terrorists near al-Bassel dam on Hasaka-Al-Shadadi road.

An army unit carries out two operations against Jabhat al-Nusra terrorists' hideouts in al-Karama and al-Shadidi areas in Hasaka countryside, killing many of them and injuring others, in addition to destroying their weapons.

A source in the province said that a terrorists' hideout in the plantation of al-Shadadi city was destroyed with all the terrorists and weapons inside.

The bodies of the terrorists Talal Aboud, hasem al-Ali and Mohammad Khaled were identified among the dead.

A unit of the armed forces carried out operation against terrorists in Daraa al-Balad, killing and injuring a number of them, including Issa Abdulhamid Aba Zaid.

A unit of the armed forces clashed with an armed terrorist group called "al-Qadsiya Brigade" in Deir Ezzor.

An official source told SANA reporter that the clash resulted in killing and injuring several terrorists, including Odai Adnan Khalouf, in addition to destroying their weapons and equipment.

The source added that another army unit targeted an armed terrorist group accompanying tank full of stolen oil in al-Hussainia village, killing all terrorists who were attempting to smuggle it to Turkey.

Units of the armed forces targeted terrorists dens in several area in Idleb countryside, inflicting heavy losses upon them.

An official source told SANA that the army unit killed and injured a number of terrorists in Matram, Kafr Haya, Mara'ian and Balshoun.