Government will punish traders and manipulators with citizens' basic needs 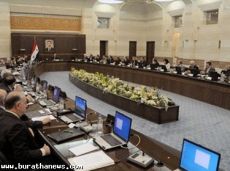 Prime Minister Wael al-Halqi instructed the ministers of economy and foreign trade as well as the internal trade and costumer protection to mobilize all available capabilities in order to provide different basic materials and subsidies to meet the citizens' needs.

"The government will take severe procedures and penalties against the traders and manipulators with the prices and those who monopolize the basic materials of citizens," al-Halqi said during a Cabinet weekly session.

"As a government, our obsession is to improve the living standards of people through putting an end to the unjustified rise of prices and combat the traders and the manipulators," Prime Minister added.

He affirmed that a committee, headed by Minister of Industry, was formed to deal with the economic and service situation of Aleppo city, provide food and petroleum products to citizens in cooperation with Aleppo governorate.

For his part, Deputy Prime Minister, Foreign and Expatriates Minister Walid al-Moallem briefed the cabinet on a review of the latest developments in the region and world and their repercussions on Syria, adding that the Syrians are determined to carry out the political program to resolve the crisis in Syria.

The Cabinet condemned the latest terrorist explosions which took place in Damascus and Homs and claimed the lives of many citizens.