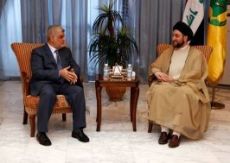 The head of the Supreme Iraqi Islamic Council, Ammar al-Hakim, stressed the necessity of not marginalizing any political bloc in forming the local governments.

A statement by the SIIC received by AIN cited "Hakim received the leader within the Iraqiya Slate, Abdul Karim al-Samarai, at his office in Baghdad where he stressed the necessity of not marginalizing any political bloc while forming the local governments," appreciating "The results of the elections,"

"Hakim assured that elections result in peaceful change of authority and peaceful living among the constituents of Iraq," the statement added, noting that "Hakim called not to marginalize any political blocs in the formation of the new governments."

"For his part, Samarai assured that the alliance among the Citizen, Ahrar and Mutahidoun blocs has positively affected the masses in all levels," the statement pointed out.

"The two sides discussed the important political issues such as the new local governments in addition to keep the cooperation between the two sides to sere the citizens," the statement concluded. /End/