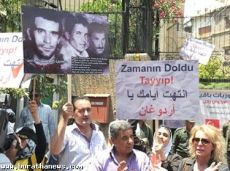 A crowd of Syrian and Turkish citizens on Tuesday staged a sit-in outside the Turkish Embassy in Damascus to express solidarity with the Turkish protesters in the face of the suppression practiced against them by Turkish Prime Minister Recep Tayyip Erdogan and his government.

The gathered people voiced denunciation of the policies of Erdogan, the leader of Justice and Development Party, in supporting the terrorist groups in Syria.

They condemned the repression against the Turkish protestors by Erdogan's forces and his government's support to the terrorists to shed the Syrian blood and steal their industrial facilities in Aleppo.

One of the Turkish participants pointed out that they call on Erdogan to step aside because he participated in Killing the Syrians, Libyans and Iraqi people, in addition to the continuation of his crimes against the Turkish people.

For his part, Head of National Initiative for the Syrian Kurds, Parliament member Omar Osei expressed solidarity of all Syrian people with the Turkish people against Erdogan's party and policy, adding that the spread of the Turkish revolution to several cities and the participation of several syndicates in it "will reduce the influence of the political Islam in the region."