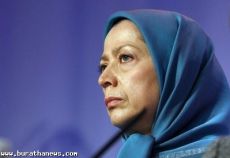 A letter - sent by a number of dissidents, former members of the Organization and Iranian activist personalities in the field of human rights in Europe- received by "Ashraf News", in which they called on Maryam Rajavi to change her position and policy of insisting on keeping the members of the Organization outside Iraq, stressing the need to Cooperate with international organizations and Western governments to move out of Iraq.

Mr. Rajavi as know very well that thousands of members of the Organization are currently living in Camp Liberty with bad physical, psychological and inhuman conditions, and waiting for disposal in the fastest time of detention after the murder and death, injury and disability. Hundreds of them were victims of sectarian war in Iraq as a result of your insistence to keep them in the land of this country. Although we reject your political project, attitude and vision based on keeping the members of the Organization, and consider it contrary to the principles of human, social and international rights, but we greatly care about the lives of our friends in Iraq. We cannot stand silent when we see their lives at risk because you have made them as a human shield to protect you and other leaders of the Organization at the time when their families awaiting for decades after they have received no information about them during those lean years.

The letter addressed Massoud Rajavi, saying: «We, to save the lives of our friends in the Camps of Liberty and Ashraf, are ready to conduct a debate with you to exchange our views and use our utmost capabilities to save their lives. You are the first responsible for their lives and their blood and you know this very well, instead of fabricating a crisis, tensing the atmosphere and situation, obstructing the efforts of the United Nations and the governments of free nations to move these people from Iraq to third countries, missing the opportunity wasting time - cooperate with international bodies and governments of free nations in the transfer of our friends from Iraq to third countries, some of which announced willingness to accommodate numbers of them. But you reject their proposals in order to put the stumbling block in the way of transfering these people to the free world because you're afraid of their liberation and exposing all what you wanted to hide from these people for all these years ».

The signatories of the letter called on Massoud Rajavi to « Courageously declaring his willingness to appear before a gathering attended by all the dissidents and defectors from the Organization and also the Iranian opposition outside Iran, especially the families of residents of Camps Ashraf and Liberty in order to answer their questions and admit his mistakes committed over the past thirty years, particularly, moving to Iraq and transporting these people to this country that is ravaged by war and crises.