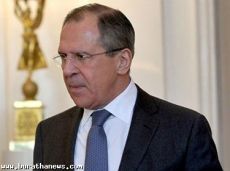 Russian Foreign Minister, Sergey Larvrov, has stressed that all sides in Syria should respect the Geneva Communiqué which was issued on June 30th, 2012.

At a press conference after a meeting with Hungarian counterpart, Janos Martonyi, Lavrov said that all sides in Syria should abandon preconditions and stop delaying dialogue.

He noted that Moscow insists on giving a positive response to Syria's request on conducting a UN investigation on reports of chemical weapons use near Aleppo.

He added that the Syrian issue will be discussed during the visit of U.S. Secretary of State, John Kerry, to Moscow.

On March 19th, Foreign and Expatriates Ministry sent two identical letters to President of the UN Security Council and the UN Secretary General stating that in a dangerous escalation to the crimes perpetrated by the armed terrorist groups in north Syria, these groups launched a missile at 7,30 in the morning from Kfar Dael region into Khan al-Asal area in Aleppo governorate.

"The missile fell in a region populated by civilians on a 300- m distance from the post of the Syrian Arab army soldiers," the Ministry said in the letters.

The Ministry went on to say that Syria calls on the international community to seriously move to prevent those terrorist groups from perpetrating more dangerous crimes against Syrian people through putting an end to the military, financial, political and logistic support offered by the countries which back those terrorist groups, particularly Turkey, Qatar and some western states without considering the repercussions of that support on the innocent Syrian civilians whose blood is shed at the hands of the terrorist groups.