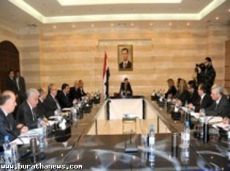 Prime Minister Wael al-Halqi affirmed the importance of the political parties, social and economic activities' participation in dialogue to reach common denominators to build a national pact that meets aspirations of citizens and realize the national reconciliation.

Niazy underlined her party's positive interaction with the national issues, its support for the peaceful movement, rejection of violence or using weapons by the armed groups, saying "The party puts all its efforts to help rescue Syria from the challenges to which it is exposed."

Both the Ministerial Committee and members of the Party reached common denominators represented by supporting the national dialogue program and the political program to resolve the crisis in Syria.