Putin: We Call for Solution to Halt Violence, Syrians Are to Determine Their Future 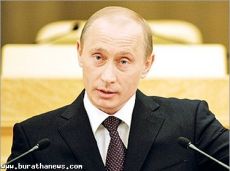 Russian President, Vladimir Putin, on Thursday stressed that the Syrian people are the only ones to determine their destiny and the future of their country.

Speaking at a press conference in Moscow, Putin reiterated that his country calls for a peaceful solution to the crisis in Syria that brings violence in Syria to a halt and prevents the collapse and the fragmentation of the Syrian state.

He said that Russia has no private interests in Syria and cares only about Syria's stability and future.

The Russian president noted that the Syrians should agree on how to live, how to ensure their security and stability and how to build their state, "after which we can move to change, not vice versa."

He astressed that it is futile to base agreement on military victory.