Khalq Organization defends al-Hashemi and condemns death sentence against him 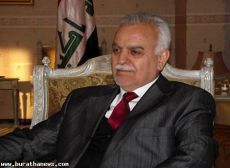 The MEK terrorist organization defended the convicted with terrorism, Vice President-leader of Renewal Movement Tareq al-Hashemi, describing him as "one of the most prominent Iraqi national leaders."

The organization condemned the decision of death sentence of al-Hashemi and his office director. The organization said in a statement posted on the Internet that "al- Hashemi had always more assertive positions against the hegemony of the Iranian regime in Iraq, suppression of the residents of Camp Ashraf and the violation of their rights."

The MEK terrorist organization, which has a close relationship with some political figures in Iraq, called on the international community to address what it called "the repression, crime, random executions in Iraq and the strict condemnation of the death sentence decision against al-Hashemi."

MKO stated that the penalty decision against Iraqi Vice President is issued on a day in which Baghdad and a large number of Iraqi cities witnessed series "criminal bombings".