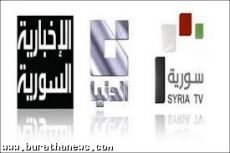 NileSat Company stopped broadcasting the Syrian satellite channels in a unilateral procedure unjustifiably violating terms of the contract signed with the Company and the Media Code of Ethics, Ministry of Information said on Wednesday.

This procedure contradicts principles of media work in an unacceptable and blatant way within the framework of the campaign targeting Syria, the statement added.

The Ministry stressed its condemnation of this violation and considered it as direct evidence on its administrators' bias to the side of the plot launched against the Syrian state and people, adding that this behavior serves the Zionist scheme.

The Ministry called upon the NileSat Satellite Company to refrain from its behavior and adhere to the legal regulations in this regard.

In a similar statement, the Ministry of Information announced that the Arab Satellite Communications Organization (Arabsat) cut broadcasting the Syrian satellite channels in line with NileSat Company which has already carried out its role in the Zionist project that aimed at silencing the voice of the homeland and contributing to the deception, fabrication and the falsification of facts.

The Ministry condemned this behavior which violates the simplest rules of the Arab States Broadcasting Union (ASBU) law and Syria's rights which should be preserved according to these rules.

The Ministry considered this procedure as flagrant violation of media code of ethics and principles of journalistic work, calling upon the Arabsat administration to refrain from its decision and commit to the law and morals of media.

The Ministry called upon Syrian citizens to watch the Syrian channels on the terrestrial channels and the Eutelsat and Hotbird on the following frequencies: