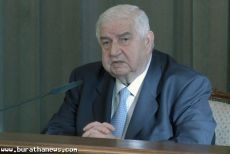 Deputy Prime Minister, Foreign and Expatriates Minister Walid al-Moallem stressed that the challenges and difficulties facing the United Nations Relief and Works Agency for Palestine Refugees in the Near East (UNRWA) in Syria are a result of the practices committed by the armed terrorist groups in the areas hosting the Palestinian refugees.

During a meeting with Filippo Grandi, Commissioner-General of UNRWA, and the accompanying delegation, al-Moallem hailed the efforts exerted by the international agency in Syria, stressing the Syrian government’s keenness to continue to host the Palestinian refugees until they get the right to return to their homeland of Palestine.

He highlighted the importance of keeping the Palestinian refugees away from getting involved in what is going on in Syria.

For his part, Grandi reviewed the efforts made by the UNRWA team to provide support and relief to the Palestinian refugees affected by the crisis in Syria, particularly in al-Yarmouk Camp.

He hailed the fruitful cooperation and constructive efforts which the Syrian government has provided him throughout the period of his work in Syria within the UNRWA, wishing that this cooperation will continue with the new Commissioner-General as to help ease the suffering of more Palestinian refugees and overcome the challenges and difficulties facing the UNRWA in Syria.

The meeting was attended by Assistant Foreign and Expatriates Minister Hossam Eddin Ala and Ambassador Milad Attieh, Director of the International Organizations and Conferences Department at the Foreign Ministry

Later, the UNRWA Commissioner-General met separately with Ala and Deputy Foreign and Expatriates Minister Faissal Mikdad and discussed with both of them issues of cooperation between Syria and the UNRWA.