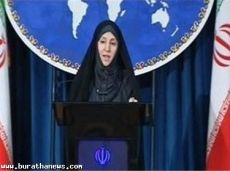 Iranian Foreign Ministry spokesperson Marzieh Afkham reiterated Tehran's call for solving the crisis in Syria by political means and its rejection of any preconditions for Iran's participation in the international Geneva 2 conference due to be held on January 22nd.

In her weekly press conference on Tuesday, Afkham voiced Iran's concern over the growing terrorism that has become a threat to the entire world community, stressing the need for the international community to work to solve this problem.

Iran's Foreign Minister, Mohammad Javad Zarif, stressed that the Syrian people alone should decide their political destiny and future regarding any solutions, during his meeting on Monday with Chairman of the EU Parliament's Delegation for Relations with Iran, Tarja Cronberg.