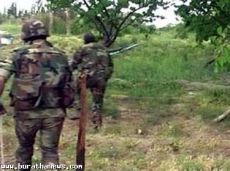 A military source said that an army unit eliminated the members of two terrorist groups in the city of Yabroud in Damascus Countryside.

The source added that another army unit killed and injured all members of an armed terrorist group in the area of al-Rhaiba.

An official source told SANA that terrorists' dens and gatherings were destroyed in al-Dar al-Kabira, while an army unit clashed with armed terrorist groups in al-Husen and al-Zara villages in Talkalakh area, inflicting heavy losses upon them.

Moreover, army units foiled a terrorists' attempt of detonating five explosives planted on the crossroad of al-Mahin town on the road of Homs-Sadad.

An official source told SANA that the army seized an ammunition warehouse comprising dozens of explosive devices and hand grenades in Palmyra in Homs countryside.

An army unit seized a vehicle loaded with Turkish wheat in al-Sukhna city in Palmyra and arrested the terrorists in the lorry.

The Armed Forces have confiscated many Turkish food materials in terrorists' hideouts in several provinces in addition to smuggled medical medicine that causes infertility through killing the testosterone hormone.

Army units destroyed a weapon and ammunition cache that belongs the terrorist Jabhat al-Nusra in the northern area of Lattakia countryside, killing many terrorists and injuring others.

An official source told SANA that a big number of terrorists were killed, most of them are from Arab nationalities, in al-Toffahiyeh and Beit Oun villages, including the terrorists Abo Hafs from Algeria, Rashid al-Sakarany from Egypt, Shukri al-Shaker and al-Mohajer from Tunisia and the Saudi terrorist Abdul Ghani al-Fayiri.

The source added that an army unit destroyed terrorists' dens and weapons caches in Salma town, killing all the terrorists inside.

Another army unit killed four terrorists and injured 22 that were fortifying in the Rural Development Center in al-Rabiya town in the coastal province.

An armed terrorist group on Tuesday blew up al-Jbisseh gas pipeline in al-Sfireh area, north Deir Ezzor, as fire was erupted in the site.

The source added that the targeted pipeline feeds the Electricity generation stations in al-Teem and al-Zara, asserting that this will decrease the amounts of gas used as fuel for the gas pumps and lead to the decrease of electricity energy production in the eastern area, in Deir Ezzor and Hasaka.

The Syrian Company of Gas' maintenance workshop will repair the pipeline soon.

The source added that a fire erupted in Kherbt Sharq 4 well in the fields of Dejla oil company in al-Rmilan area in Hasaka due to terrorist attack targeted the well by the terrorist groups with the aim of stealing its oil.

The company in coordination with the Syrian General Company for Oil work to extinguish the fire.