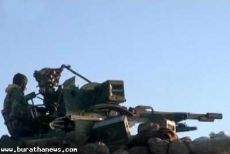 Units of the Syrian Army confronted on Tuesday terrorists who tried to attack Abu al-Duhur Airport in Idleb countryside and inflicted heavy losses on them.

A military source told SANA reporter that the army units destroyed the terrorists' cars which were equipped with heavy machineguns and killed and injured many of them.

Units of the army eliminated an armed terrorist group and destroyed cars loaded with weapons and ammunition in several neighborhoods and towns in Aleppo province.

A military source told SANA reporter that units of the army confronted terrorists who tried to infiltrate into Sheikh Said neighborhood and Syriatel area and killed and injured many of them.

The source added that dens and cars laoded with weapons and ammunition belonging to the terrorists were destroyed in the industrial city and the free zone and north of Aleppo Central Prison, Hritan, Uwija, al-Madajin, Assan Farms and Jablan.

The source pointed out that units of the army eliminated terrorist groups in Bani Zaid, al-Sheikh Khudr, Hanano, al-rashidin, al-Sukkari, and Bustan al-Qaser in Aleppo city.