Al-Moallem: Coalition delegation so-called “opposition” must abandon their illusions before coming back to Geneva 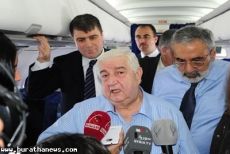 Deputy Prime Minister, Foreign and Expatriates Minister, Head of the Syrian Arab Republic’s delegation to Geneva 2 Conference, Walid al-Moallem, stressed that the Syrian side rejected a U.S. request in Montruex for direct dialogue with the Syrian delegation without “the tools embodied in the coalition delegation so-called ‘opposition’ unless U.S. Secretary of State, John Kerry, apologizes for what he had said during the opening speech of the conference.”

“They have not lived in Syria; they were not with the school and university students when mortar shells fell on them; the bodies of their relatives were not amputated, and they did not suffer from destruction of bridges, gas pipelines and infrastructure; they live in 5-star hotels, so it is not strange that they rejected because they do not live in the Syrian reality,” al-Moallem added.

Al-Moallem pointed out that who controls the coalition delegation, which is the US, will reject the Syrian draft statement in spite of the fact that its top commitments, being a permanent UN Security Council member, is to agree because the draft statement was based on the UNSC resolutions and some of them are binding resolutions under Chapter 7 of the UN Charter.

He wondered, “How does the west want to be in Geneva dialogue and they impose sanctions on the Syrian people and children?” adding that he asked Catherine Ashton, the European Union's foreign policy chief, in Montruex to explain how the west bans milk and food stuff on the Syrian people, and on the other hand the west presents the issue of humanitarian aid shipments.

Al-Moallem said "We told them that if they do not lift the sanctions on Syria, especially those that affect livelihood of citizens, we are a country that produces wheat and now we are importing wheat as to break the European blockade imposed on wheat".

He wondered how could the US support Iraq in combating the so-called "Islamic State in Iraq and Sham" group and label that group as terrorist group, and at the same time provide weapons to these terrorists in Syria on public and along Geneva conference, adding that "these side is the side that was responsible for the attacks in New York and is responsible for terrorist attacks in Syria and no one knows where these target will be afterwards," adding that this double- standard policy is rejected.

He stressed that Syria is a country that comprises  constitution, institutions, government, People's Assembly and President, adding "We will refuse anything that contradicts the constitution. This constitution was reached by a referendum and no one can reach or even think that the presidency is a topic of discussion."

On Iran's participation in Geneva conference, al-Moallem said that the UN has fell short in the issue of inviting Iran and spectrum of the national opposition in accordance to the Geneva communiqué, adding that "They did not consult us on who to participate in the coherence, I named it orchestra that is led by a maestro

which is the US", adding that he told US Secretary of State John Kerry that no one in the world, neither Kerry or the countries which revolve in the US orbit has the right to speak on behalf of the Syrian people because the Syrians are the only side to determine their future.

On the jurisdictions of the transitional government, al- Moallem said that if the other side has illusions that the transitional governing body or the upcoming government will restrict the jurisdictions of the  president in violation of the current constitution then this side should abandon these illusions before coming to Geneva.

On whether the Syrian official delegation held side meetings, al-Moallem said that "It is important to know that the Syrian diplomacy does not hold unannounced side meetings. We do not work under the table with any side whatsoever."

On whether the Syrian official delegation has offered lists of the names of the persons who were abducted by the terrorist groups, al-Moallem said that "to be able to offer lists on the names of the abductees, we should know which sides are committing kidnapping acts," adding that these sides are multiple terrorist groups that are not supportive to the coalition named "opposition".

"Even if we made such lists, they will say they do not have them, we want them to tell us the names of the persons who were abducted by the terrorists in the areas which are under their control and to say what are their demands, then we are ready to deal with them because we are fully sympathetic with the families of the abductees," al-Moallem said.

On the sedition statements made by some members of the coalition, al-Moallem said that they are igniting sedition and the statement of the "Islamic State in Iraq and Sham" proves that, adding that "I have told them in Montruex that all of us are Christians when churches are targeted and we are all Muslims when mosques are targeted, they have failed in their attempts because of the awareness of the Syrian citizens and their rejection of sectarianism."

On the Turkish statements which were made during the visit of the Turkish Prime Minister to Iran, al-Moallem said that actions not words are taken into account and there were no such action on our northern borders.

On why the Syrian delegation did not negotiate with Washington directly instead of having negotiations with its tools, al-Moallem said that "Frankly, the Americans have asked for that in Montruex and I refused unless Kerry apologies for the speech he made in the conference."

Al-Moallem concluded by saying that "I am relieved to return to the homeland first, and over the credibility and professionalism of our national media during the conference, stressing that the official delegation has  the trust of President Bashar al-Assad and the Syrian leadership and people."