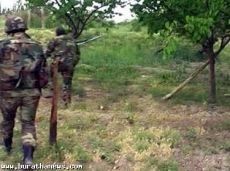 Members of armed terrorist groups continue to suffer severe losses at the hands of the army soldiers as dozens of them are getting killed and their weapons destroyed, in addition to foiling their infiltration attempts and other attempts to transfer ammunition in boats.

Several citizens injured, including 5 children, in terrorist mortar shells in Damascus and its countryside

A number of citizens were injured, including five children, in terrorist mortar shells in al-sayda Zainab, al-Qassa and Bab Touma neighborhoods in Damascus and its countryside.

A source at the Police Command told SANA reporter that two mortar shells fell in al-Qassa neighborhood causing the injury of seven citizens and material damage to the shops and cars nearby.

A mortar shell launched by terrorists fell on the Shrine of al-Sayda Zainab in Damascus countryside, causing the injury of 10 citizens, including 5 children, in addition to material damage to the building.In Jaramana city.

the source pointed out that three mortar shells fell the city causing the injury of four citizens and material damage to the shops and cars nearby.

A citizen was martyred Thursday in a blast of an explosive device terrorists had earlier attached to a car at Deir Ali intersection in al-Keswa area in Damascus Countryside.

A source at the Police Command in the province told SANA reporter that terrorists detonated the explosive device once the driver got on the car, which caused his immediate death.

The car was completely burned, the source added.

A military source told SANA reporter that most of the terrorists were killed during the operation.

A military source told SANA that a unit of the army eradicated an armed terrorist group and destroyed 6 cars equipped with heavy machineguns and loaded with weapons and ammunition in al-Dumir area in Damascus countryside.

Entire groups of armed terrorists were eliminated by the hard blows of the Syrian Arab Army units in a number of villages and towns in Damascus countryside.

An official source told SANA reporter that an army unit clashed with a terrorist group in al-Maliha town and killed all its members, while another unit eliminated a number of terrorists in al-Aleih farms and destroyed their weapons and ammunition.

The source added that a factory for making explosive devices was destroyed with local rockets inside in Marj al-Sultan town, in addition to eliminating 11 terrorists most of them are foreigners.

In Harasta, the army units pursued armed terrorist groups and killed two members, while 5 terrorists were killed in Irbin town.

Army units made further advancement in pursuing armed terrorist groups in Tal Arn village in al-Sfeira countryside, killing and injuring terrorists in a number of towns and villages in Aleppo.

A military source told SANA that an army unit tightened control on around 60 per cent of Tal Arn village, which is the second gathering area for terrorists in Aleppo southeastern countryside after al-Sfeira to which the army restored security and stability last week.

Cars loaded with weapons and ammunition were destroyed in Seifan village northwest of Aleppo central prison, the Industrial City in Sheikh Najjar, Heilan, Khan al-Asal and on al-Mansoura-Daret Azza road.

The source added that an army unit thwarted an attempt by terrorists to infiltrate to the safe areas from al-Atareb-Khan al-Asal axis, killing many terrorists, among them leader of "Noureddin al-Zinki Battalion".

The source pointed out that an army unit clashed with an armed terrorist group on the outskirts of al-Sayyed Ali area, killing most of its members.

In Idleb countryside, a number of cars loaded with weapons and ammunition were destroyed in Saraqb city, and large numbers of terrorists' concentrations were destroyed.

Citizen martyred in terrorist attack in village in Homs

Meanwhile, a citizen was martyred and his wife was injured in a terrorist attack by rocket shells on Ein al-Dananir village in al-Mishrfeh area, east of Homs.

A unit of the armed forces on Wednesday eliminated scores of terrorists, seized 4 boats and destroyed others loaded with ammunition in al-Rastan lake in Homs countryside.

An official source in the province told SANA reporter that the terrorists were using the boats to smuggle ammunition to the armed terrorist groups in al-Rastan and al-Hula areas.

The source added that a machinegun shooter was killed in the framework of hunting armed terrorist groups in Bab Hud neighborhood in Homs city.

A military source told SANA that units of the army eradicated armed terrorist groups on the way between al-Hamira town in Damascus countryside and Mahin town in Homs countryside and tightened control over the road.

The source added that tightening control over the road is a hard blow to the armed terrorist groups in the area as it constitutes a main road for the terrorists' supplies.

a unit of the army eliminated four terrorists and injured others in an operation carried out in Tishreen oil field in Hasaka countryside.

An official source told SANA reporter that a unit of the army inflicted heavy losses on the terrorists in al-Tweineh area in Hasaka countryside and Abu Qasaib and al-bajarieh areas in al-Qamishli countryside.

A military source said that units of the army eliminated members of terrorist groups and destroyed their weapons and ammunition in Maarat al-Nouman and Nahleh and Bizabour villages in Ariha district in Idleb countryside.

The source added in a statement to SANA that terrorists Khaled Zaidan and Abdul-Karim al-Shahad were identified among the dead terrorists.